You can view some photos of our trip down the Lower Yuba here.

The Yuba River will kick off our campaign as our first river in January of 2012 in conjunction with the Wild and Scenic Film Festival.

The Yuba River has been named one of America’s most endangered rivers as of May 2011 due to the inaccessability of critical salmon habitat. There are two federal dams on the Yuba River that prevent salmon and steelhead from reaching spawning grounds, one of them being the Engelbright Dam. In order to take steps toward wild salmon population rehabilitation in California, it is imperative that salmon be able to access the Yuba above the dam. Aside from preventing access to critical fish habitat, the dams reduce stream flow levels and alter amphibian and fish habitat. Overall, hydropower dams are a major threat to endangered salmon in the Northern Sierra region. 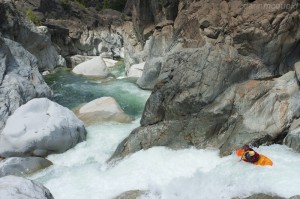 The headwaters of the South Fok Yuba riverYuba River