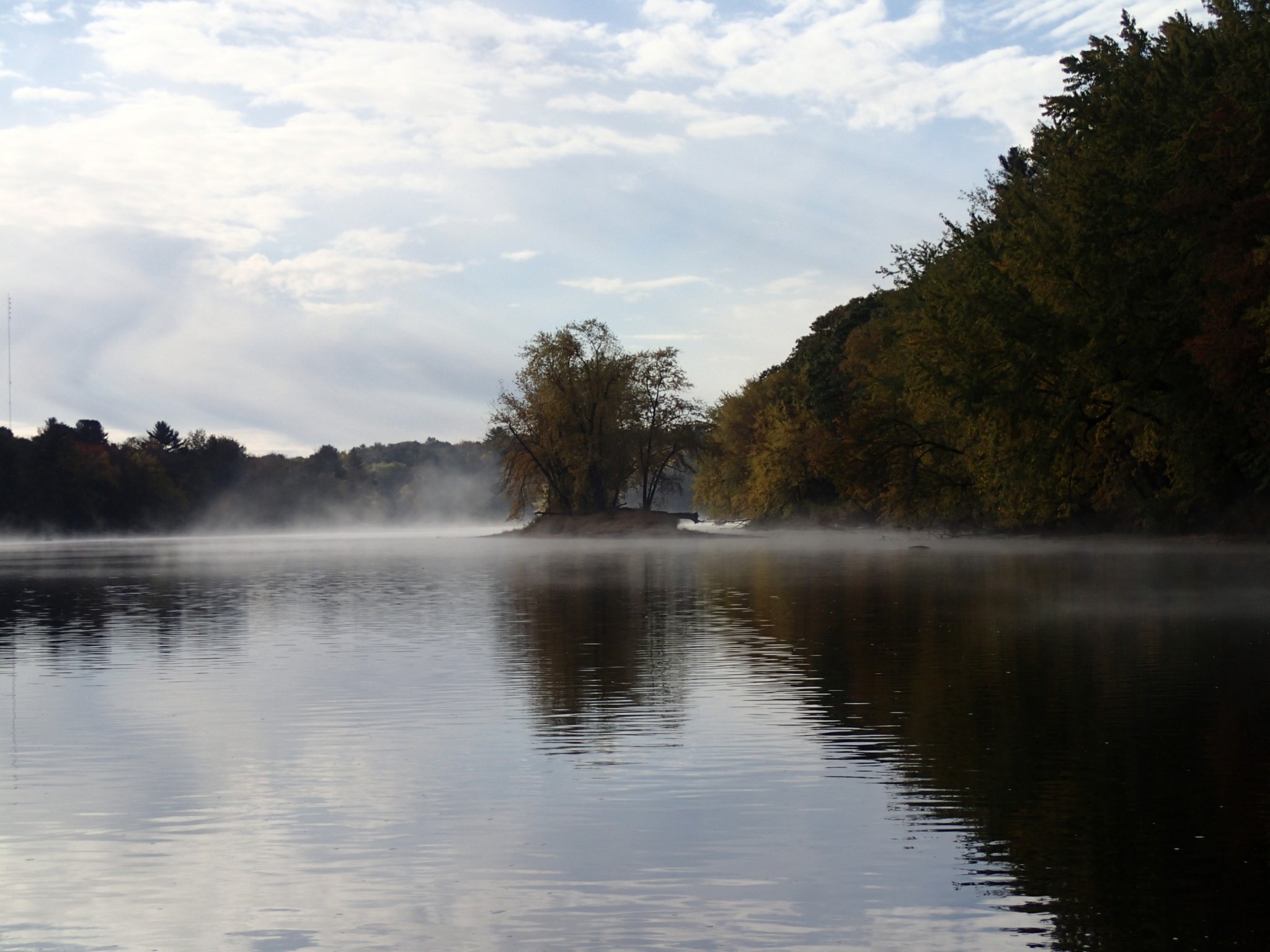 “Considered one of California’s most unique coastal wetland types, the Estero Americano contains a diverse assemblage of wetland communities and estuarine habitats. Originally formed from a “drowned river valley”, the estuary has steeply sloping hillsides and an abrupt transition from upland areas to open water. This unique fjord-like quality is not seen in other California wetlands, with the exception of the neighboring Estero de San Antonio (Madrone Associates, 1977).  The ecological value and significance of these natural resources take on even greater significance when it is recognized that more than two-thirds of California’s coastal wetlands have been degraded or destroyed in the last hundred years (Madrone Associates, 1977).” 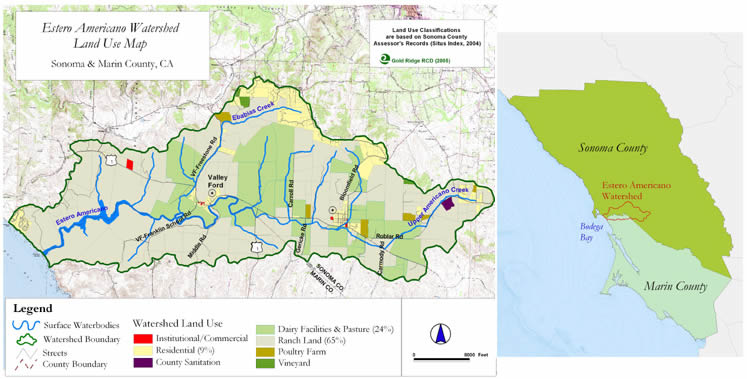 Location: Coastal estuary at the base of Americano Creek, drains into Bodega Bay, forms part of the northern border between Marin and Sonoma counties, heart of Pacific Flyway

Size: 49 square miles, when the mouth is open tides can range up to 4 miles upstream

Seasonality:  Americano Creek is the main tributary of the Estero and often dries up during the summer months, sometimes beginning as early as late spring and staying dry through the early fall 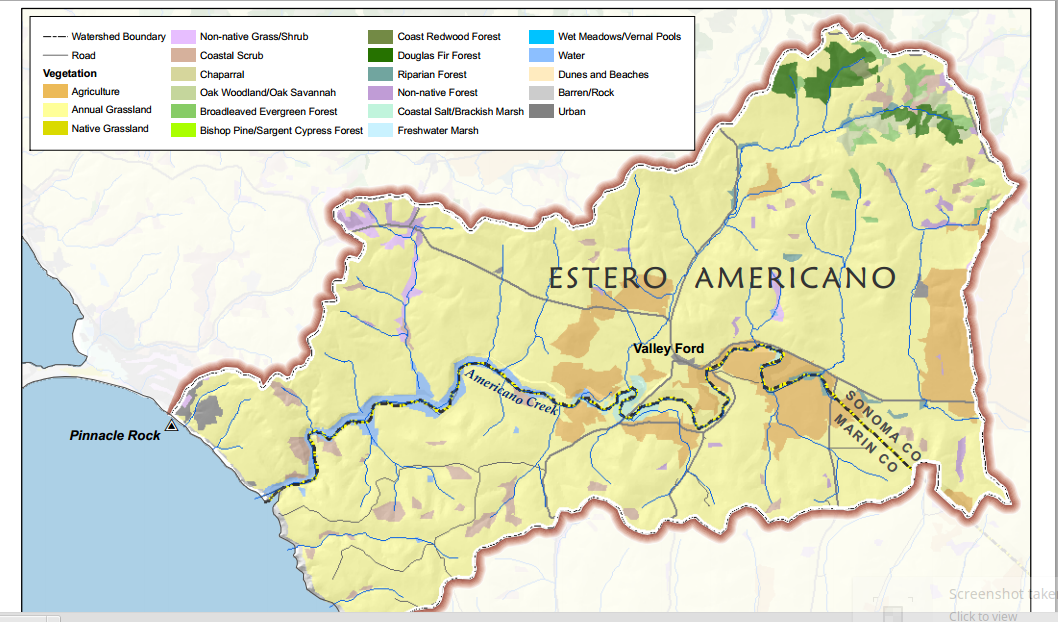 “Historically, the watershed was inhabited by Coast Miwok. From 1865 to 1982, the area was used extensively for agriculture, including corn, beets, potatoes, onions, oats, and hay. In the late 1800s, the Estero Americano was reportedly a navigable body of water, and products such as potatoes were shipped to market” (Estero American Watershed).

Between the mid 1800s and the mid 1900s, much of the land was cleared of native vegetation for logging and farming purposes, potatoes being the primary crop. Potatoes are harvested in the late fall, and as a result the disturbed soil was greatly impacted by the fall and winter rains. During this period an estimated 1 million cubic yards of sediment was washed down into the Estero. This was the beginning of the erosion debacle now faced by the Estero. Farming has slowly transitioned out and there are no longer large-scale cultivated crops in the watershed.

Currently over 80% of the land use in the watershed is small, multigenerational livestock ranches and dairy farms. Because of this continuity of land ownership, the Estero Americano is relatively undisturbed. Of course, the dairy farms and pastures have a flipside too.

1)  High rates of erosion resulting in “sediment loading” into estuary* 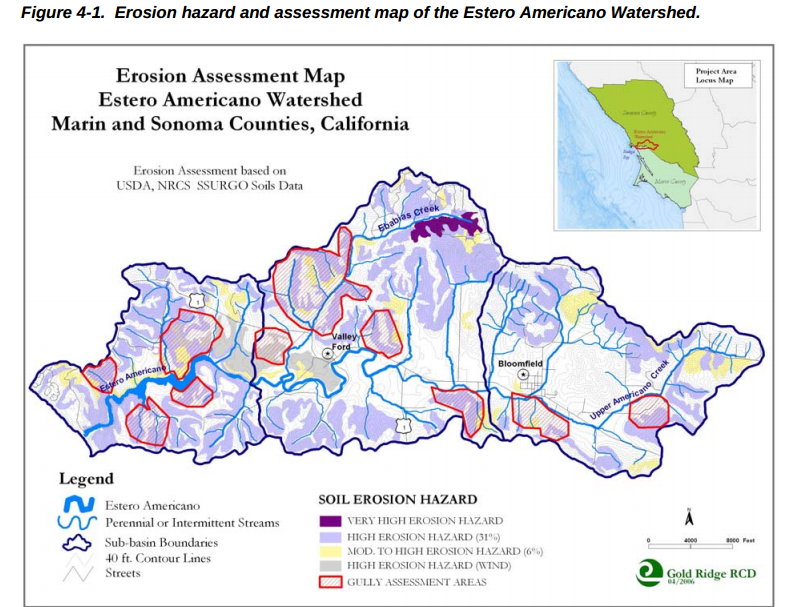 There are many effects of the land being put towards agricultural and livestock use. As mentioned above, it can have positive effects, with large tracts of land staying in tact with plenty of open space and habitat for wildlife. However the flipside of that is high erosion due to the implementation of ranch roads, unmanaged livestock grazing, and removal of native riparian vegetation leading to destabilized streambanks and gully erosion.

While livestock are eating away at the stabilization of streambanks, they are also excreting appropriate amounts of waste (hence the Cow Patty Pageant). Currently all the runoff from the dairy farms, the pastures and the agricultural fields goes into the estero. This means high amounts of ammonia and nitrogen in the watershed.

High nitrogen levels can cause algal blooms in the estuary, greatly decreasing the amount of dissolved oxygen in the environment. Decreased oxygen means massive die-offs for oxygen dependent species (like fish) in the estuary.

What is being done about it?

There are a couple of different organizations working on management plans for the Estero Americano.

Gold Ridge Resource Conservation District is very active in reducing erosion and improving water quality. They are working on livestock and agricultural management, mapping and surveying the estuarine species and revegetation.

The Sonoma County Agricultural Preservation and Open Space District and Marin Agricultural Land Trust  are also active in the watershed. There is a 127-acre Estero Americano Preserve, which is owned by the Sonoma Land Trust.

How can you help?

For more involvement you can always actively participate in the management of your watershed. For the Estero Americano, there are research projects, clean ups and various non-profits working on managing and protecting this area. There are plenty of positions available to volunteer with Gold Ridge RCD, the Sonoma Land Trust, and the Sonoma County APOSD 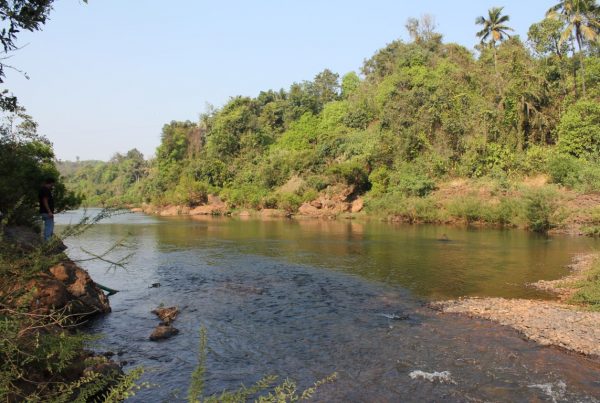 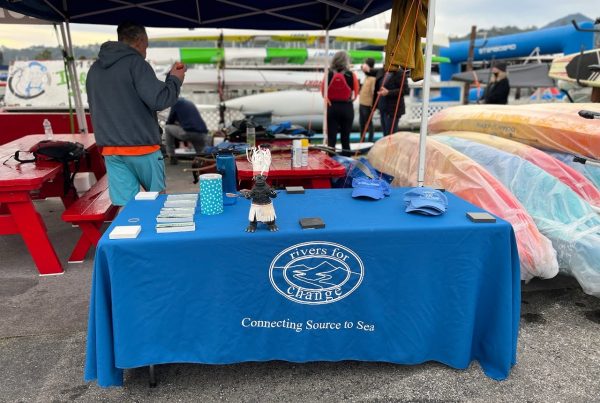 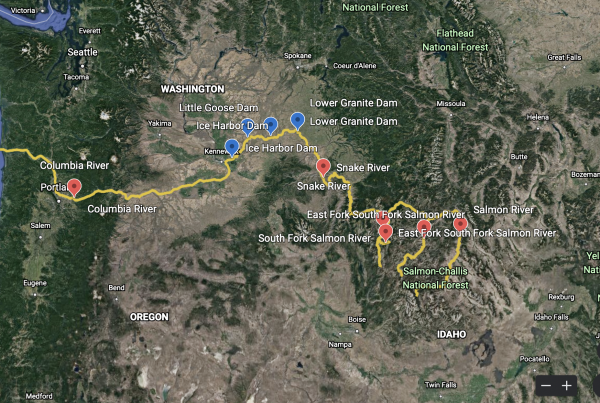