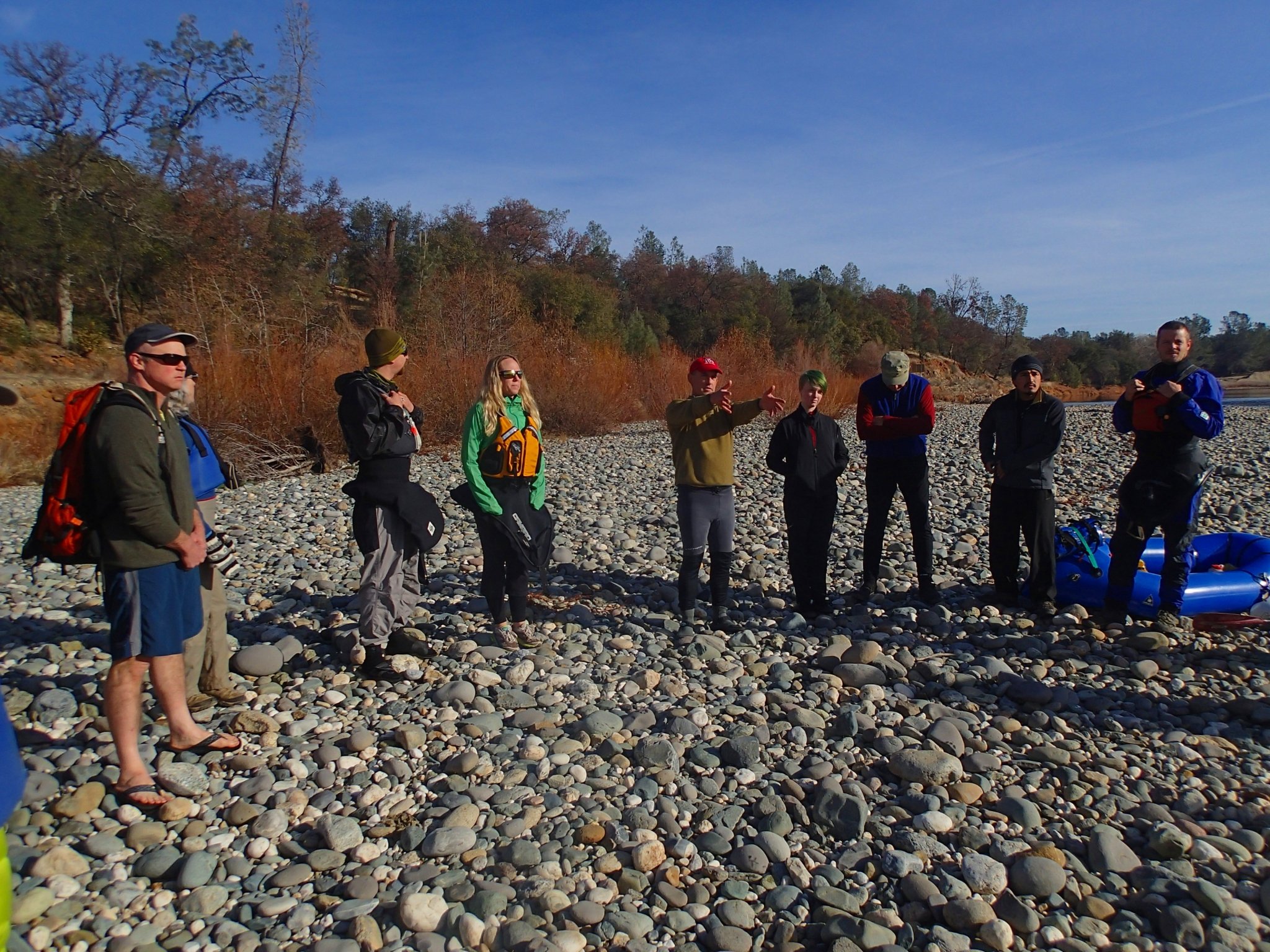 January 10th was not a typical January morning.  It was about 20 degrees warmer than it should have been, but nobody was complaining. After all, for winter rafting you take all the sunshine you can get. Then there was the company. It was like the river mafia. Car after car pulled up to Hammon Grove Park adorned with a variety of bumper stickers, some of which touted support for Rivers For Change (RFC) and South Yuba River Citizens League (SYRCL), our partner in this whole affair. More notable however, were the boats.  Canoes, kayaks, even a few rafts colored the parking lot. People mulled about making introductions and smiling at old friends, talking about their favorites for the upcoming film festival. RFC co-founder John Dye was plopped in the center of the parking lot with a folder full of waivers, a thermos of coffee and an easy smile. People and rivers, a perfect example of our grass-roots, home-grown organization. 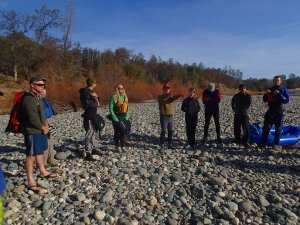 After the usual shuttle shuffle (which no matter how many people show up always seems to be the most complicated and confusing part of any day on the water) everybody circled up for more formal introductions.  The variety of people was astounding: whitewater enthusiasts from Reno, a local BLM employee, a few promising filmmakers, a handful of SYRCL representatives, new volunteers from the Tuolumne River Trust, an environmental litigator,  a plumber from the bay area, a few local paddlers and a riptide physicist from England; a ragtag group of river-loving people.

Gary Reedy, the river ecologist from SYRCL gave a great introductory talk on the lower Yuba watershed. This river has lived a million lives and scars still line the riverbanks.  Mine tailings are piled high on either side of the river, remains of hydraulic mining during the gold rush. Forceful mining processes changed a once nutrient rich floodplain two miles wide into an odd landscape of cobbled hills, forcing the river to find a narrow, meandering path through. 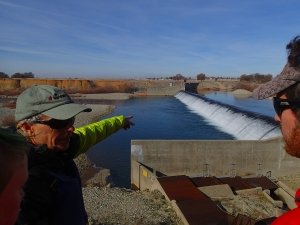 After over a decade of advocating, 39 miles of the South Yuba  River (part of which was paddled in the morning) was declared Wild and Scenic in 1999. In 2003 Nevada City hosted the first ever Wild and Scenic Film Festival in honor of the designation.  Although a big win for SYRCL, this was just the beginning.  SYRCL’s river program is currently working to restore the lower Yuba River.  We could see and hear the river running by, a tired remnant of its former glory.  Nearly 40 miles upstream the river is trapped and tamed by the 280 ft high slab of concrete, Englebright Dam. Taking advantage of this steady release, we launched on our January paddle, a colorful smattering of watercraft disrupting the Yuba’s glassy reflection.

California’s lack of precipitation meant lower flows and some pushing of rafts, but about an hour later we came to our portage, lunch spot, and official end of the Wild and Scenic stretch, Daguerre Dam. Lunch consisted of little formal talking, but rather more excited chatter. People were asking questions, sharing ideas, noting problems and trying to think of solutions. The energy was intoxicating. A boating trip of twenty strangers had turned into a think-tank filled with people dedicated to making a difference.  No idea was the same, everybody came with a slightly different background and perspective, but everybody was receptive, listening attentively and building on one another. 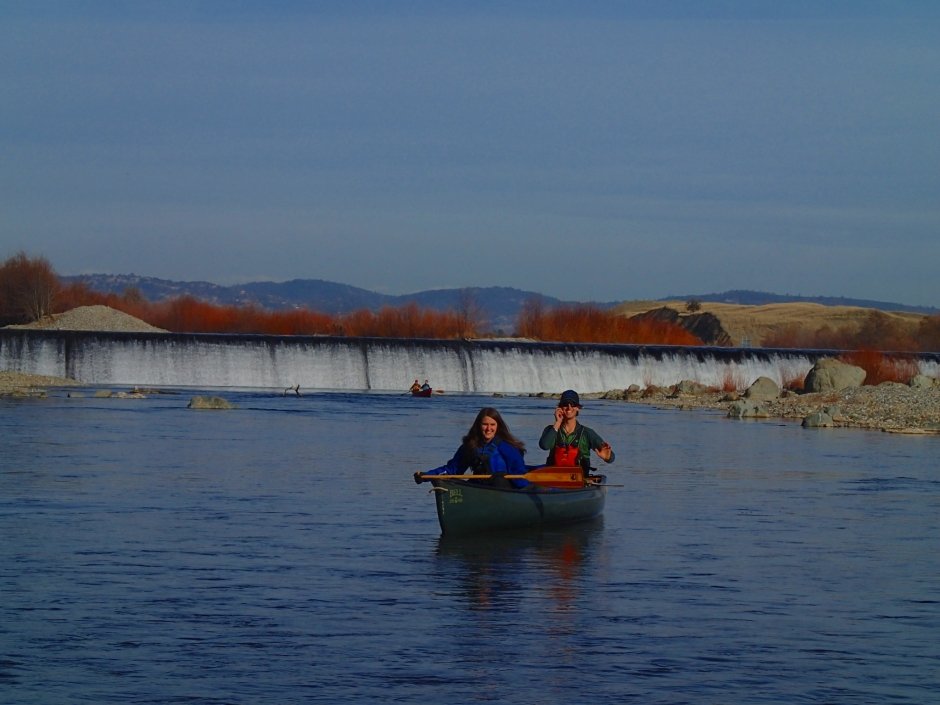 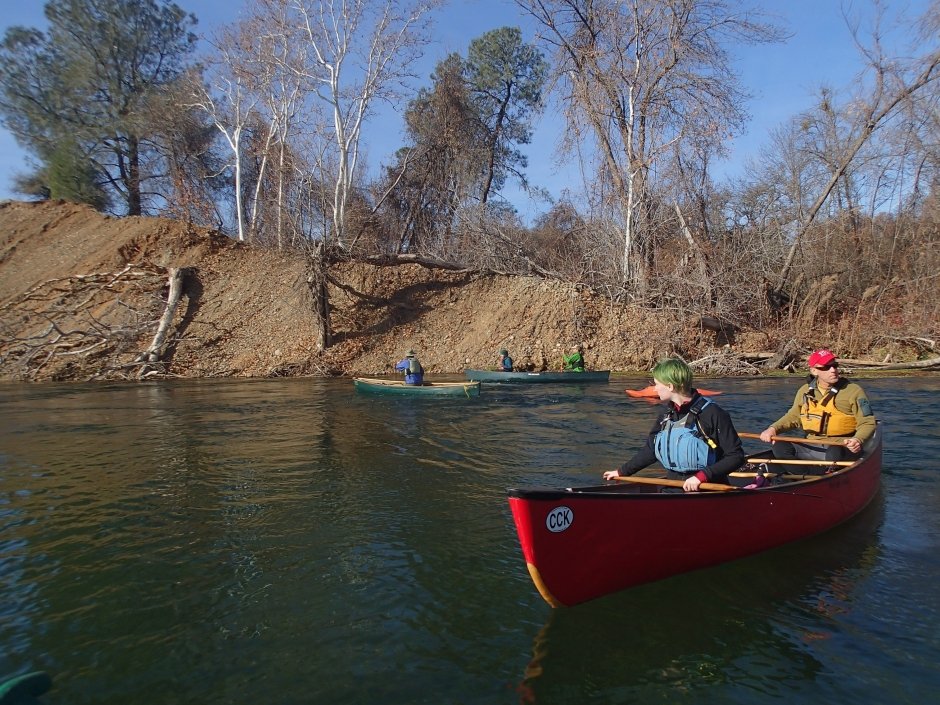 The afternoon was spent floating through a dramatically impacted riparian corridor. Ideas kept flowing.  We had to push boats a few more times. As the take-out came closer silence slowly stole over.  Anticipation for the upcoming film festival was certainly there, but there seemed to be something else.  Something brought on certainly by the boaters but also by the river. To me it seemed like a daunting sense of hope, a hesitant optimism and a renewed connection of people and rivers. 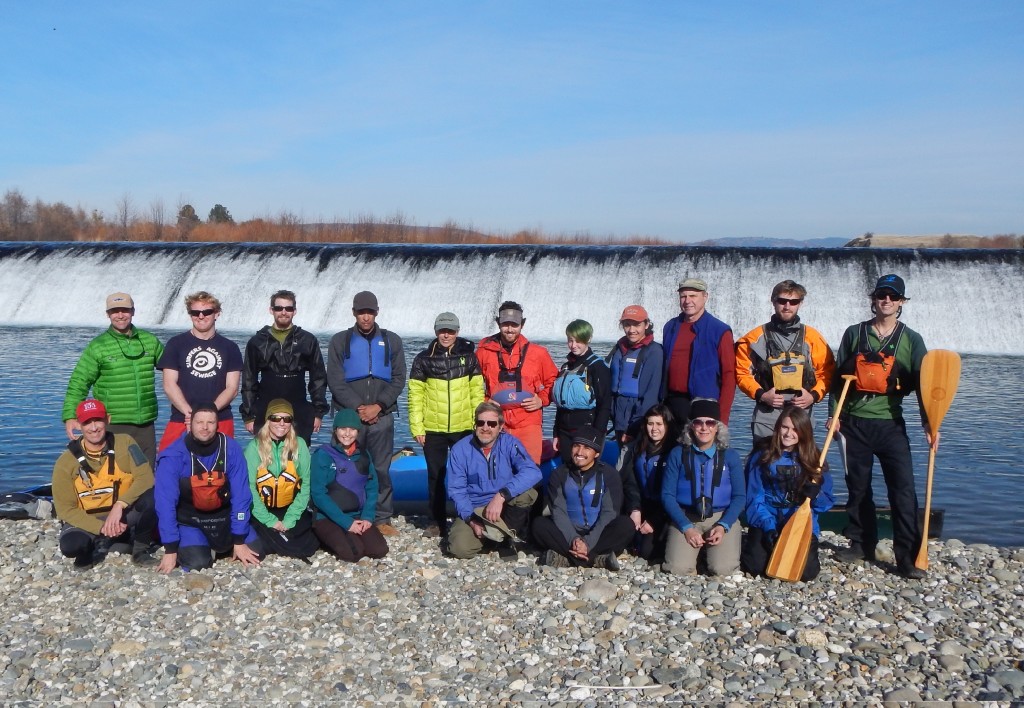