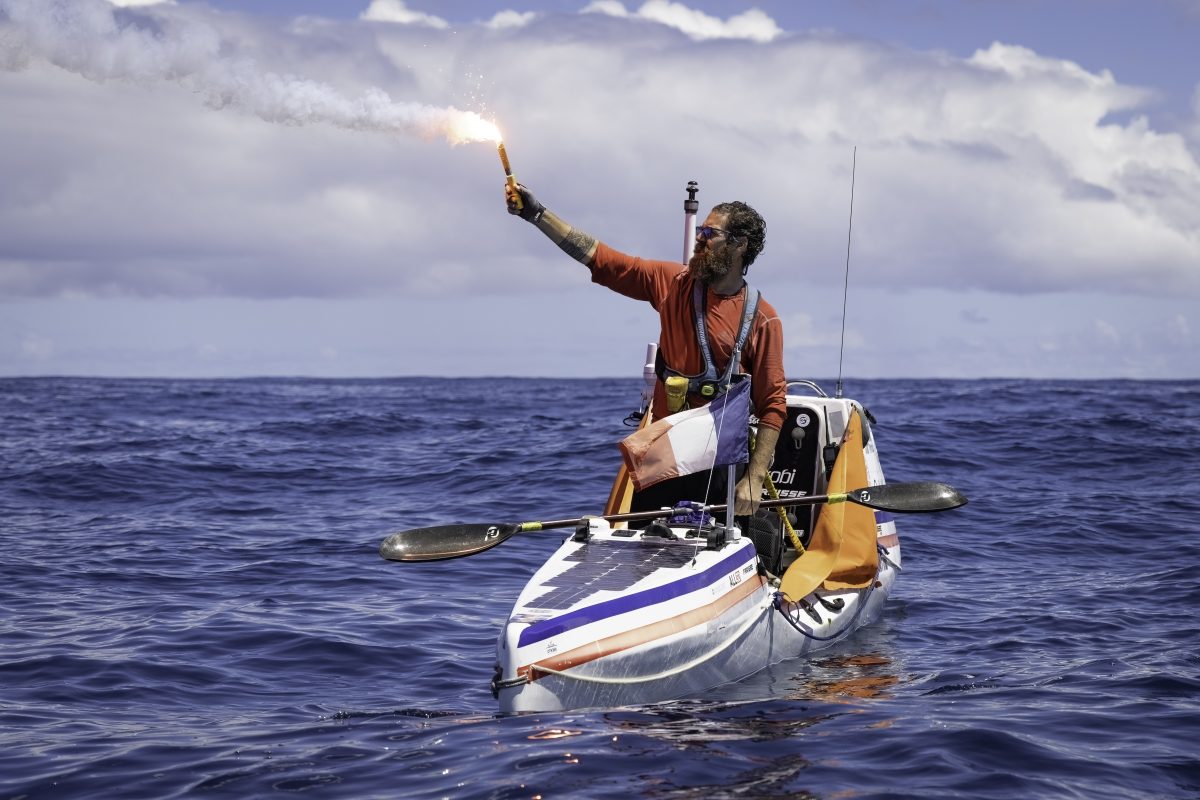 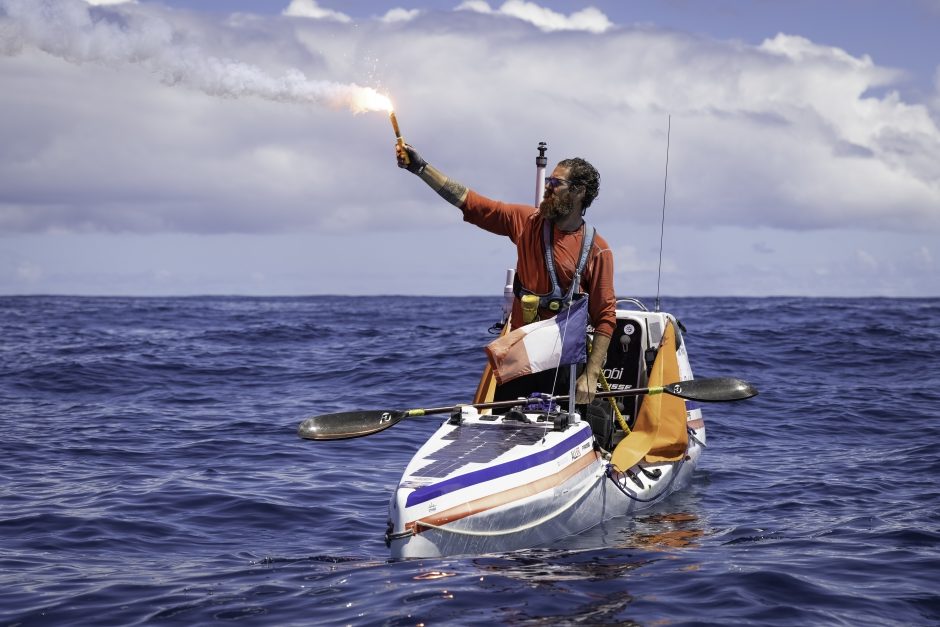 After 91 days and 9 hours at sea having departed in the early morning of June 21st from Monterey, California, kayaker Cyril Derreumaux successfully landed at Hilo Bay, Hawaii on September 20, 2022 becoming the first 100% human powered kayak to cross the 2400 nautical miles (4444 km) solo and unsupported.

It was a joyful welcoming scene upon arrival. From the kayaker having reached the conclusion of a project that had taken 4 years to complete – a 2020 planned departure that was aborted due to covid and a June 2021 attempt that was prematurely interrupted due to a damaged sea anchor and bad weather and from his supporters – land support, friends, family, athletes and supporters some of whom traveled across the world to celebrate his arrival. Through a thick beard that has not been trimmed since leaving the California coast 3 months earlier, Cyril smiled widely expressed his great satisfaction at having completed this challenge.

Cyril Derreumaux’s immediate reactions: “It was a magnificent adventure, clearly also a spiritual journey. Before leaving I couldn’t really explain why I wanted to take on this challenge, but I finally found all the answers to my questions on the water. I loved sharing my trip with all those who followed me on the map or the social networks. I encountered all possible weather conditions during these 3 months. Very rough seas in which I had to stay locked inside my cabin, without even being able to sleep, it was so moving, but also an ocean that can be so calm that it transforms you deeply so much it fills you with tranquility. I experienced moments of pure magic when all the elements came together: calm of the sea, calm of the currents, calm of the winds, and the visit in the middle of nowhere of a bird. It was so simple and so beautiful… Now I just want to grab all my loved ones and hug them, especially all those who supported me during this crazy adventure, Dave, Ashley, Thiago and all the others ! I could never have done this without your help!” 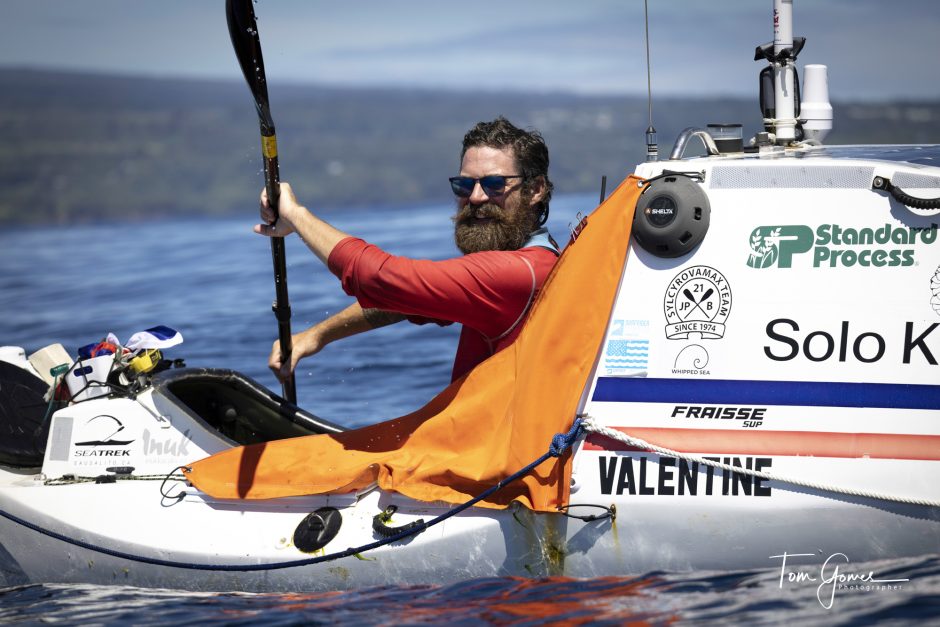 Born in France, Cyril Derreumaux, naturalized American – and world citizen as he likes to call it, was able to manage the difficulties in the first weeks of his trek that pushed him to give up the adventure last year during his first attempt. Sea sickness for the first few days, lack of sleep, change of rhythm, physical efforts, new diet… Thanks to his previous experience and his patience to pick the optimal weather window the week following his departure, he successfully managed to maneuver away from the California coast. Two steps forward while paddling during the day, one step back at night because of the currents, he had to work with great determination to beat the strong currents and dominating winds pushing him toward the US and Mexican coasts during the first few weeks.

The coming weeks were as difficult with the battle of great fatigue, several damages that he had to manage: a leak at the back of his boat started to flood a compartment that had to be sealed, cabling issues with his battery that had trouble charging, a close encounter with the tropical storm “Estelle” which, thankfully, lost intensity just before crossing path with the kayak, but still required him to stay sheltered in is cabin for 2 days while waves were bashing his boat and sustaining winds of 25 knots.

On day 46 of his crossing Cyril’s main electrically powered water maker broke down and he was forced to decide yet again if he was able to continue the journey. Deciding to continue on with his adventure, Cyril relied on his back up manual water maker, manually pumping for 1 hour each evening and 45 min each morning to pump the gallon of water each day that he consumed.

Leaning on his great logistical preparation and a supporting land crew as determined as he is, resolving issues one after the other, Cyril Derreumaux continued his way with a 9-9.5 hours of rowing per day towards the Hawaiian islands while sharing the highs and lows of the experience daily through a public journal translated in French and English published on Facebook, Instagram and his tracker map. Through the stories of the different events happening on board, reflecting on his project, life lessons that he learns, and sharing his emotions, Cyril inspires those following along to “live life to the fullest.”

Cyril, who is a member of the “The Explorers Club”made landfall on September 20, 2022 at 12h49 am greeted by a gathering crowd and a welcoming escort from the local paddling community ushering him back to land. The expedition took 21 days longer than was initially estimated, forcing Cyril to ration his food for much of the last part of his journey and change his final destination from Honolulu to Hilo due to his dwindling rations. He thus completed solo and unsupported the first crossing of a kayak using only human propulsion across the Pacific Ocean. Cyril follows in the steps of legendary kayaker Ed Gillet who in 1987 crossed the Pacific in an off the shelf kayak and at times used a kite as a secondary propulsion method.

Upon completion of his adventure, Cyril will continue work to complete the documentary of the solo kayak to hawaii project that he has been working on for the last 4 years as he prepared for this endeavor. He hopes to write a book about his experience and continue work as a performance coach and motivational speaker inspiring others with his own adventures of pushing the limits of what is possible.

Cyril is available for media interviews, podcasts, and speaking engagements in person or via zoom in 5 languages.