Peter Sawtell of Seven Rivers Paddling and Matt Palmariello of Maine Paddling Connection completed the Lamprey River Source to Sea for Rivers for Change on May 16th, 2019. The Lamprey River, located in Northwood, NH, is a truly a beautiful example of a backyard river that simultaneously holds the federal designation of a Wild & Scenic River. This combination of beautiful and accessible puts the Lamprey in a class with some of the most cherished rivers in North America. Simply put, the Lamprey River is a treasure hidden in plain sight.

Peter and Matt began the trip with a 1/2 mile portage into the headwaters pond at Northwood Meadows State Park.  From there, they followed the tiny Lamprey River 50 miles until they reached the salty waters of Great Bay, where it converged with six other rivers before reaching the sea.  Along the way the Lamprey River grows in size and volume, spills over multiple dams, meanders through gorgeous forest and drops through gorges, producing class III whitewater.

Peter & Matt were padding the entire river from Source to Sea to scout the route in order to bring a group of kids onto the waterway later that summer.  Peter and his company were planning the Rivers For Change Source to Sea School with 12 students for 5 days of outdoor & environmental education, skills development, and adventure. Could this river be a potential venue?

Shortly after launching in the source pond, they reached the far shore and had to make their second portage in less than a mile.  This one involved a steep hike and descent into a tiny river flowing through a wetland.  With the recent rain, there was adequate flow for Peter’s kayak and Matt’s canoe. They decided that rather than portaging another couple miles around the wetland, they could traverse it on water and avoid compromising sensitive habitat.

The next 5.5 miles took them five and a half hours to complete.  In paddling time, that pace is slow.  But they were doing a combination of paddling, walking, pushing and pulling the boats downriver.  The goal was simply to follow the flow and explore the upper stretches of this river as it changed from meadow to swamp to pond to creek to river, regardless of whether or not they were inside their boats.  The journey was both exciting with exploration and grueling with obstacles. They trudged on, knowing that eventually, the river would increase in volume enough to paddle their way towards the sea.

By 7:30pm they reached Freese’s Pond about six miles downstream from the source. Due to dam control, it is a fairly large expanse of water considering how low the water had been.

They launched at 7:00am the next morning only to paddle around the corner to another portage.  Below the dam, the Lamprey changed into a winding rocky stream that held some of the most exciting whitewater of the trip.  It wasn’t big whitewater, but it flowed around big beautiful moss-covered rocks and through old forest that felt like a movie set.  The river traveled past homesites, through old dam and mill ruins, under beautiful rock bridges, past tall cliffs, the whole time gaining depth and volume.

By late afternoon, they reached the Wild & Scenic section of river. This section is largely left undisturbed in order to protect fish habitat.  Unfortunately, that means many strainers to go over and around. For miles, they followed the winding river without seeing any homes or signs of human activity.

By nightfall they’d paddled 33 miles and reached Wadleigh Falls, an old broken dam and set of falls.  They made a short portage around and ended the day on the banks, opting to complete the next 12 miles the following day.  That night they scoured their notebooks and decided that the Lamprey would be a fantastic site for a Source to Sea School and continued to outline the 5 days of paddling and 5 sections of river to profile and paddle with the students.

The next day went smooth for them and involved only one more portage.  The stretches below Wadleigh Falls held some exciting quickwater that the kids would love, before slowly transitioning into flatwater held back by the Wiswall Dam.  Wiswall Dam to Packers Falls is a short fun section, but deemed inappropriate for the students since it involved a class III drop that required quick maneuvering to set up for.  Negotiating that and the few rapids below it, they completed the last three miles of flatwater to Newmarket, NH.

As they pulled their boats from the river, Peter and Matt knew this was a river destined to be shared.  It was only a matter of time before they returned to the river with students.

Read more about the Lamprey River Source to Sea School.

Read more about the Lamprey River at lampreyriver.org 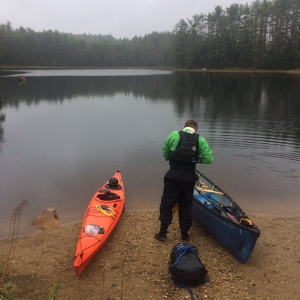 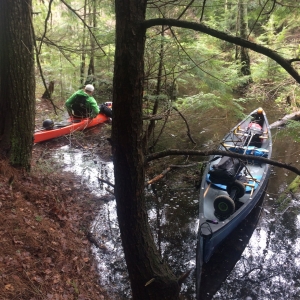 Entering the meadow just downstream of the official source of the Lamprey River. 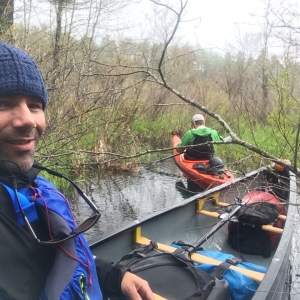 Making our way through the meadow. 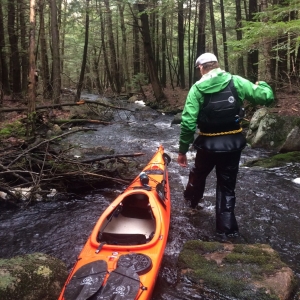 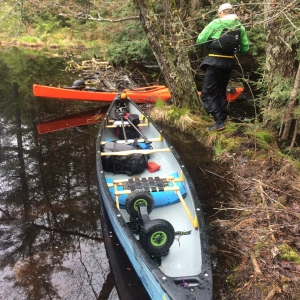 Made it through the meadow, entering the creek. 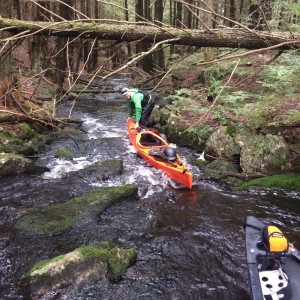 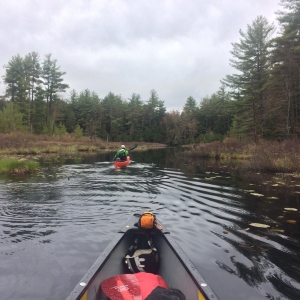 Making our way to more water. 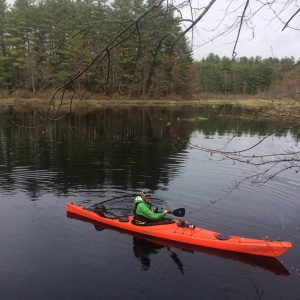 In the upper stretches. 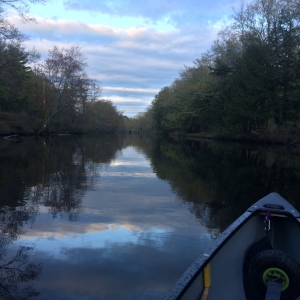 Paddling the end of day two. 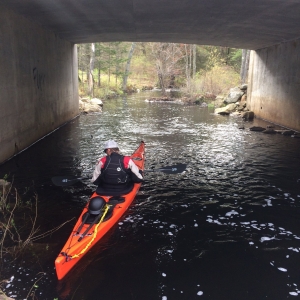 Peter just below our first dam 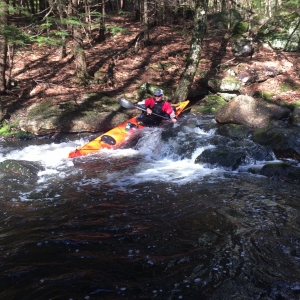 Peter having some fun 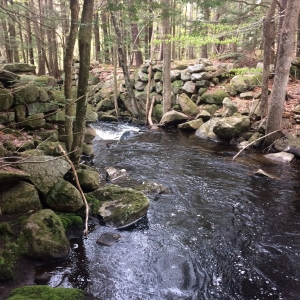 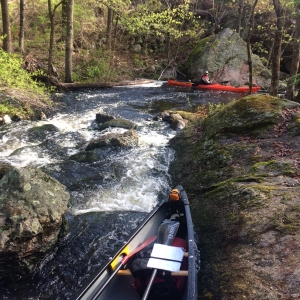 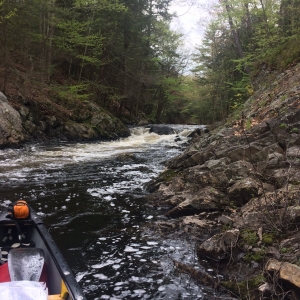 The gorge near Route 102, one of the most anticipated rapids of the trip 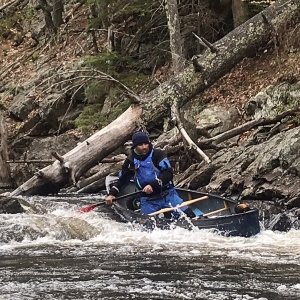 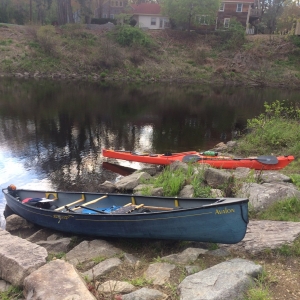 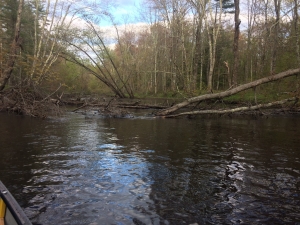 Strainers were all too common. 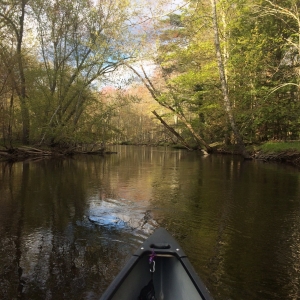 The Wild & Scenic section is truly beautiful and we’re looking forward to returning with kids. 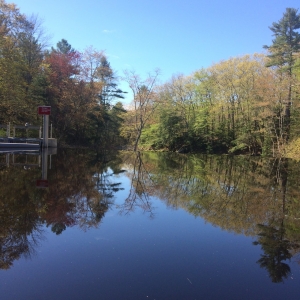 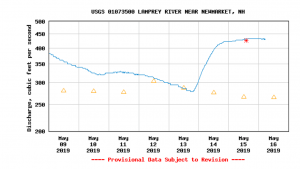 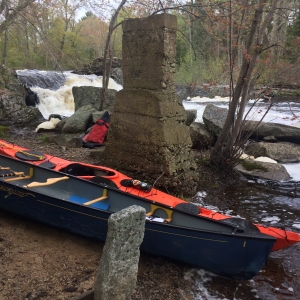 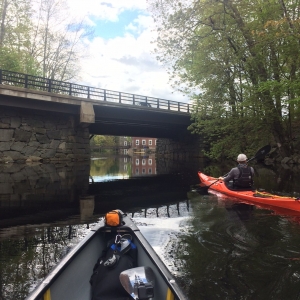 Almost there! Just above the dam in Newmarket

The last dam on the river